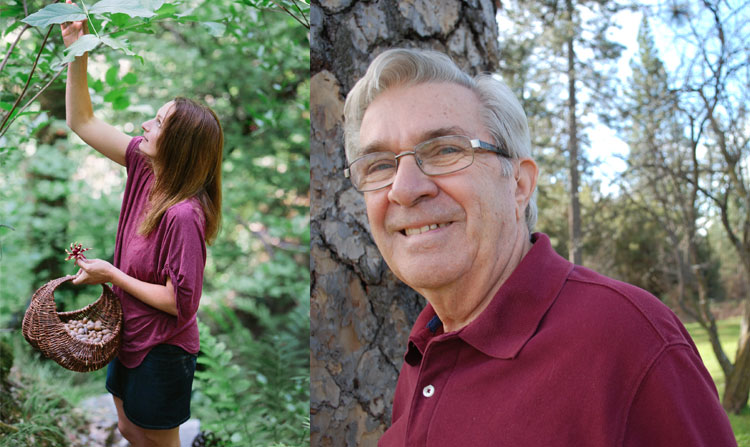 During this intimate gathering, the Land Trust will honor Alicia Funk with the William Nickerl Award for Conservation Leadership and treks leader Clarence Motter with the John Skinner Sierra Outdoors Recreation Award.

“I’ve known Alicia for many years and have seen how her passion for our local natural environment has really captured her imagination. She has turned that passion into action by becoming our local expert on culinary and medicinal wild, native plants, and traditional uses by indigenous peoples. She has advocated for our understanding and the use of them through tours and talks, lectures, writing and now film making. This award recognizes exactly these qualities among people like Alicia in our community,” said BYLT Executive Director Marty Coleman-Hunt.

Alicia Funk is the founder of the Living Wild Project and co-author of Living Wild—Gardening, Cooking and Healing with Native Plants of California. She lives off the grid with her husband and their three children. She first studied plant-based medicine in 1990 from an indigenous grandmother in Ecuador’s rainforest.

“I first made a deep connection with nature as a young child, just spending hours playing in the woods, which I felt were my home. That initial love of the outdoors has guided me to protect and share the natural home I love,” said Alicia Funk.

Funk received her BA, MBA and certificate from the American School of Herbal Studies. She is the editor of six publications on herbal medicine, including Herbal Medicine: Expanded Commission E Monographs, The ABC Clinical Guide to Herbs and The Botanical Safety Handbook. Her Living Wild books and programs www.livingwild.org support environmental and cultural conservation.

Funk is a long-time supporter of BYLT and believes strongly in the organization’s mission. She has led nature walks, orchestrated art shows and provided books and native plant baskets for fundraisers.

“We are so lucky to live close to abundant access to nature, and the land trust has worked diligently to expand the areas in conservation,” she said.

Only two months into 2015, her calendar is full. In January, two short films on Living Wild were featured during this year’s Wild and Scenic Film Festival and she co-directed a new series of short educational films on local food plants to be released each season. This year she teaches classes on native edible and medicinal plants for the California Native Plant Society, Soil Born Farms, Shingle Springs Rancheria and San Francisco State University.

She will reprint the popular Living Wild, publish a book about Tahoe wildflowers by Julie Carville and create recipes for a new cookbook with the help of local chefs. She is refining a list of best candidates for community food cultivation of drought-tolerant crops, is honing her efficiency in processing wild foods and continues to test the nutritional content of native California edible plants.

As a mother, family and community is important to Funk. She has begun transitioning her home landscape to one dominated by natives that can be easily gathered for food and is constantly developing recipes that her kids will eat.

Living close to the land means Funk pays attention to the rhythms of nature and notices seasonal changes of plants. She knows that every time a piece of wilderness disappears, we lose a piece of ourselves.

“We can form environmental values by caring about the experience future generations will have living on the earth – do we want them to experience the beauty and full diversity of natural life or just a fragment of what we enjoy?”

Working with American Rivers, the US Forest Service and the California State University, Chico, Funk has prepared a meadow site for low intensity burning according to traditional ecological methods with the goal of reducing non-native plants and enhancing native plant health and diversity.

In the community, she shares her knowledge of wild ingredients with local restaurants, and offers four course wild food dinners for a number of non-profit fundraisers. Funk makes a point to collaborate with indigenous groups such as Shingle Springs Rancheria (Miwok), Mountain Maidu and Sierra Native Alliance to bring back native foods into those communities. In addition, she is developing relationships with farmers in an effort to grow drought-tolerant native food crops.

“Conservation comes down to the choices we make each day for our family, our community and ourselves. My hope is that we can remember how to conserve, cultivate and enjoy the plants native to the place we call home.”

Clarence Motter loves the outdoors. He can’t remember a time when he wasn’t curious about what he would find on the other side of the mountain.

“All of our trek leaders are extremely generous with their time, expertise and passions.  However, Clarence’s curiosity about our community and his passion to ferret out as much information as he can about an area has made him a particularly informative and interesting expert leader for the trekking program. Every time I go out with Clarence I learn something new,” said Fund Development and Community Program Manager Melony Vance.

Each year, Motter takes groups to explore the World War II era bunkers and an autumn full moon tour at Spenceville Wildlife Area; or the historic cemeteries doting the back roads in Nevada County and the always sold out guided spring trip to Table Mountain for vernal waterfalls and wildflowers. He also co-leads a hike with fellow hiker Sue Graf to the Donner Summit Train Tunnels.

“I enjoy visiting these various places. It’s great I can help other people enjoy them, too,” he said. Besides volunteering as a trek leader for the Land Trust, Motter volunteers every Saturday at the Empire Mine State Park gift shop.

Motter graduated from Ohio University with a Major in Art and Photography in 1963. He spent a life-time as an industrial photographer, moving to Nevada County with his wife and two daughters in 1978 for a position at Grass Valley Group. It was then that he discovered his passion for hiking and, in nature, he found himself.

He naturally became a “pseudo leader” with a casual group of senior hikers known locally as “The Wednesday Hikers.” Upon retiring in 1999, it wasn’t uncommon for Motter to venture out to the woods three times a week for a hike. His curiosity led him to research old mining and pioneer history of many of the trails he traveled.

“I have really made it a passion to know every local trail and road there is in Nevada County,” he said.

It’s these stories behind the trails and outdoor places in Nevada County that have made Motter such a popular trek leader for the Land Trust over the years.

Motter’s connection to the Land Trust goes back to the founding years, 25 years ago when the Land Trust was formed by a small group of concerned citizens who saw development threatening the region’s rural way of life. A long-time member and volunteer, Motter helped build and maintain trails like Rattlesnake Ridge, Independence Trail and the connector to Cascade Canal. He helped paint the North Star House during the early years of restoration.

In many ways, Land Trust values – like preserving open space and getting people outdoors – mirrors Motter’s own life path.

“Volunteering is rewarding in itself, but being chosen to be honored by Bear Yuba Land Trust for what I love to do, is humbling, and greatly appreciated,” he said.

Eva and Gary will provide live “Bossa Nova and Jazz” while participants sample appetizers donated and prepared by: California Organics, Jernigan’s, BriarPatch Co-op and Living Wild. Fabulous local wine and micro-brews will be served at a no host bar during Happy Hour from 5 to 5:30 p.m.

The John Skinner Sierra Outdoors Recreation Award is named in honor of John Skinner, former Forest Supervisor for the Tahoe National Forest. After retirement, Skinner followed his passion for hiking and trails through his writing of the popular book and online publication, “Sierra Outdoors Recreation.” A regular treks leader for the Land Trust, Skinner died in 2009. Past recipients include local archeologist/ author Hank Meals, co-founder of the Trust for Public Land Greg Archbald and wildflower expert and author Julie Carville.