“Humans have had enormous impacts on birds and other wildlife, both positive and negative,” said Ornithologist Ted Beedy as he looked through his photo archive of tricolored blackbirds on his home computer screen.

For 30 years Beedy has studied these native colonial-nesting California birds and observed their population numbers plummet when open space habitat in the Central Valley was converted to rows of mono crops like fruit and nut orchards and vineyards. In the 1930s, the birds numbered about 3 million. Today, only about 150,000 remain, representing an overall population decline of more than 95 percent.

“Birds are kind of a barometer. If bird populations are healthy it tells you what’s going on with the world,” said Beedy.

Bear Yuba Land Trust (BYLT) will recognize Ted Beedy as a lifetime conservationist with the “William Nickerl Award for Conservation Leadership” during the annual Oak Tree Bash from 5:30 to 7:30 p.m. on Tuesday, March 14 at the historic North Star House, 12075 Auburn Road in Grass Valley.

During the event, BYLT will also recognize long-time community heroes: Ron Mathis for his work with many local nonprofits and organizations including BYLT, Nevada County Fair and Big Brothers Big Sisters and the North Star House; and Warren Wittich for his volunteerism on the Independence Trail, Sequoya Challenge and South Yuba River Citizens League. Each will receive the John Skinner Sierra Outdoors Recreation Award.

At this Annual Meeting designed for land trust members and supporters, the community will hear about expanded protection of lands in the upper watershed (12,000 acres saved to date), updates on ongoing restoration work like the Independence Trail, treks, new trails and youth nature programs. During Happy Hour, guests can sample gourmet food from Emily’s Catering and Cakes and sip local micro-brews and local wine from Lucchesi Vineyard served from a no-host bar. 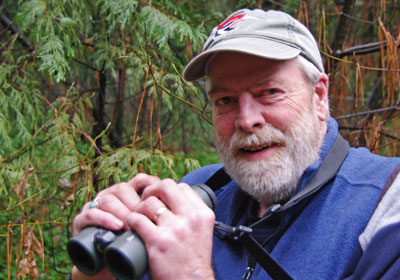 During his career, Beedy has played a significant role as a scientific expert in precedent-setting environmental cases that show the impacts of human activity on the natural world.

He is the author of the species account for the tricolored blackbird that appeared in the publication “California Bird Species of Special Concern: A ranked assessment of species, subspecies, and distinct populations of birds of immediate conservation concern in California.” He was also the lead author of the “Birds of North America” account for this species and co-authored the illustrated books, Discovering Sierra Birds and Birds of the Sierra Nevada: Their Natural History, Status, and Distribution.

In the 1980s, while working as a young wildlife biologist for an environmental consulting firm, Beedy studied what happened when highly toxic selenium-laced agricultural run-off and subsurface drainage from Westlands Water District was dumped into the Kesterson National Wildlife Refuge in central California. Birds were often born without wings, heads or beaks.

“It was huge news back then. Many of those birds were born with deformities,” he said.

A few years later, his career took him to Mono Lake a critical migratory stop-over point for more than a million shorebirds, grebes and ducks. Mono Lake also supports the world’s second largest nesting colony of California gulls. Once safe on lake islands, the gulls had become easy prey for predatory coyotes when lake levels receded.

Beedy’s scientific observations of Mono Lake’s water sucked down by thirsty Los Angeles County filled hundreds of pages and three volumes.  He was cross examined by the State Water Board during the landmark case that eventually swung in favor of this unique ecosystem.

“If it would have gotten much lower, it would have wiped out the entire population of gulls and many of the other birds that depend on this amazing ecosystem. I felt like I played a role in saving Mono Lake,” Beedy said.

Beedy has been birding for 60 years, since he joined the Cub Scouts at age seven, and has traveled to all of the California’s 58 counties, almost every state in the U.S. and much of the world to pursue his passion.

His small cabin-like office filled with an extensive library of every bird in North America, overlooks a pond busy with wood ducks and mallards swimming in the rain.

A former Land Trust board member who continues to lead lectures and treks, Beedy sees the work of BYLT protecting open space rangeland and forest land as critically important for preserving wildlife habitat and protecting the community from devastating wildfire.

“Part of what keeps my interest in BYLT is the way they manage land. It’s exactly what I would recommend for these properties. Well-managed ranches are incredibly valuable to wildlife and our society,” he said. 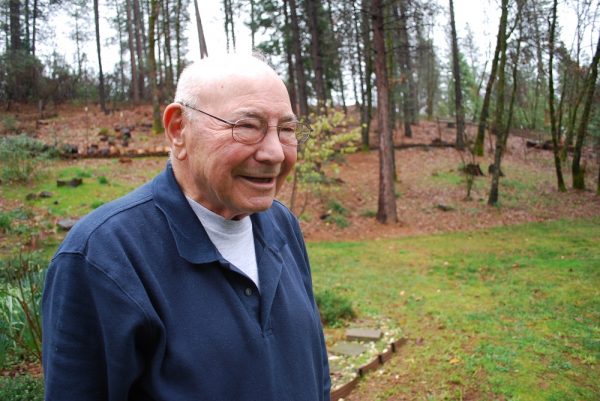 In the trophy room of his wine cellar, a number of awards and certificates adorn the walls from community and youth groups Ron Mathis has given his support to over the years. Mathis and his wife Beverly escaped from Los Angeles to Nevada County in 1991. They moved to a quiet piece of land near Alta Sierra where they soon got to work clearing waist high blackberries and poison oak and building their dream homestead.

It was a welcome change to the 12-hour work days of a successful career in Los Angeles County that resulted in a heart attack at the office when he was 52. Suddenly, priorities changed, and Mathis followed a yearning to get out.

After retiring from his high-paying job as Deputy Director of Systems Finance and moving to the Northern California Foothills, Mathis befriended the late John Taylor who introduced him to the Land Trust. Soon, Mathis was keeping the books, managing stewardship funds and monitoring conservation properties.

“The Land Trust grew a lot during the time I was there. We were doing good things. I was making a difference.”

A soft spot for Independence Trail 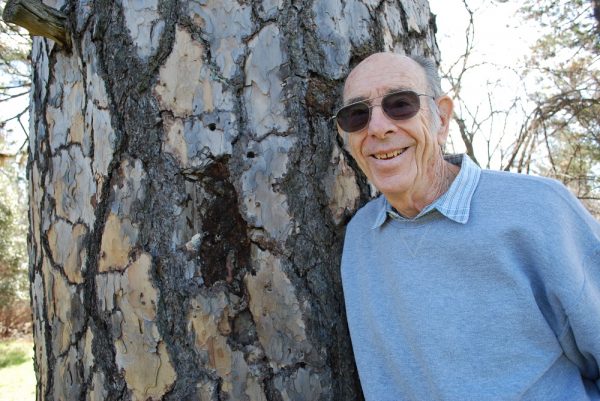 Warren Wittich first learned of the Independence Trail when his friend invited him for a hike on the west side 20 years ago. He was instantly smitten with the trail built by the late Naturalist John Olmstead and volunteers, known for its Gold Rush-era flumes and ditches. Posted on the kiosk at the trailhead was a notice calling for trail volunteers. Wittich was drawn to the cause and remains so to this day.

In no time Wittich was on the board of Sequoya Challenge and in charge of the maintenance of the trail. When the nonprofit group disbanded, Wittich continued to drive the 55 miles one way from Fair Oaks to work on the nation’s first wheelchair accessible trail, now as a volunteer for South Yuba River Parks Association.

With the trail now co-managed by State Parks and BYLT, Wittich, age 83, continues to devote at least one day a month working with BYLT’s Land Access Manager Shaun Clarke and volunteers to keep the trail in good working order. Wittich is optimistic that the community can come together to raise awareness and funding to restore the dilapidated wooden ramp at Rush Creek.

The retired Wonder Bread delivery truck driver says access to nature for all is important to him. He finds meaning in his life when he helps others.

“Occasionally I’ll meet someone on the trail in a wheelchair and I tear up. I can see how much they are enjoying it. I know. I’m a softie,” he said, with tears in his eyes.