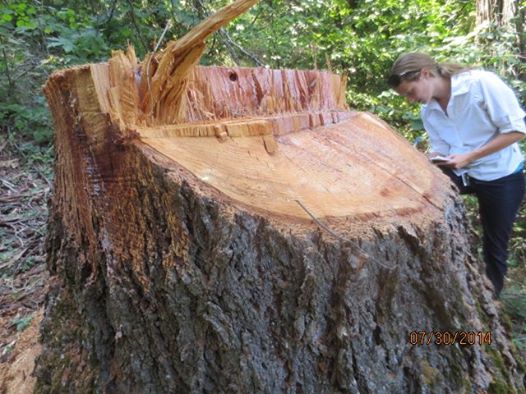 This week, local Attorney Michael V. Nudelman agreed to settle with Bear Yuba Land Trust (BYLT) in a lawsuit for the unauthorized cutting of several large growth trees – over a century old – on Woodpecker Wildlife Preserve in Nevada City.

BYLT has agreed to drop the pending lawsuit in exchange for the settlement funds that will go toward remediation efforts of the Preserve, considered essential habitat for five species of woodpecker, including the largest in North America.

“We are pleased to have this matter resolved so we can direct our full attention toward our mission of conserving land,” said BYLT President Terry Hundemer.

In 1999, BYLT acquired the 28.23-acre preserve near Banner Mountain neighborhoods through a donation from Saving Special Places, LLC. BYLT manages the property for its old growth forest and wildlife habitat values. Now in its 27th year, BYLT is a membership-supported nonprofit organization that promotes voluntary conservation of open space and wildlife habitat, ranches, public nature preserves, and trails.

Nudelman owns a parcel of land adjacent to the Woodpecker Wildlife Preserve. In 2013, he requested permission from BYLT to remove “three medium size firs which are directly blocking my view.”

After some consideration, including a site visit with Nudelman, BYLT denied his request based on the value of the trees as part of the forest ecosystem. BYLT determined cutting the trees would diminish the conservation values of the land the organization was meant to protect. Large growth trees are quickly disappearing from urban areas and provide critical wildlife habitat, food sources and a refuge to a wide variety of birds, mammals and amphibians.

Approximately six months after his request was denied, BYLT discovered four very large conifer trees had been cut down on Woodpecker Wildlife Preserve. Of the four trees cut down, three were identified as those requested by Nudelman to be cut the year before.

The trees were found, cut and left on the slope. The scattered tree limbs and branches have increased fire danger on the preserve. Some of the trunks were left lying in the adjacent ravine and are now clogging the natural stream runoff channel. Others landed on the edge of the ravine, jeopardizing the slope stability. The trees ranged in age from 110 to 159 years old and their trunk diameters ranged from 18 to 44 inches.

In June 2015, BYLT filed a lawsuit against Michael V. Nudelman in civil court alleging unlawful trespass and tree cutting. Throughout the process, BYLT was aided by Terrafirma, a legal defense fund established by Land Trust Alliance in 2011 to help land trusts across the nation defend their conservation lands from legal challenge.

In the lawsuit, BYLT alleged that Nudelman contracted a tree service to fell the trees and create a better view for his home. In total, four large trees were intentionally cut down and three other trees were irreparably damaged as a result of the cutting.

Woodpecker Wildlife Preserve is known by hikers who use the Orene Wetherall Trail and the Cascade Canal Trail. Public access has been enhanced with interpretive panels and native planting projects. The preserve provides essential habitat to five species of woodpecker including the largest species in North America, the Pileated Woodpecker.

The preserve is composed of a mixed hardwood-conifer forest and is largely dominated by ponderosa pine, incense cedar, Douglas fir, bigleaf maple and black oak. Over the past five years BYLT has implemented fuel reduction projects in the areas adjacent to the homes in the southern part of the preserve. Bird surveys, hydrological and biological studies and invasive plant removal have also been part of the recent projects.

Considered a conservation leader in the Bear and Yuba River watersheds, BYLT has conserved nearly 12,800 acres of Sierra Nevada and foothill forests, oak woodlands, meadows, riparian habitat, farms and ranches. BYLT works with willing landowners, agencies, and other organizations to permanently protect and steward critical landscapes through voluntary conservation easements, fee acquisitions and other strategies. BYLT follows an American tradition of local land trusts who protect and defend conservation of its land interests, in perpetuity, which began in the mid-1800s, joining the efforts of over 1,800 local land trusts nationwide.