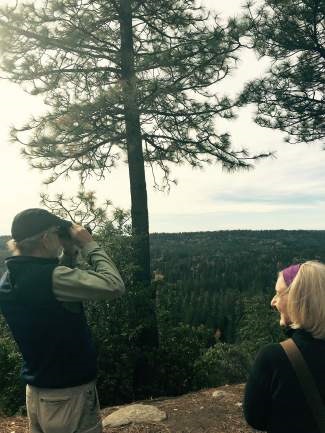 In December, snow-capped peaks make the short climb to the top especially inviting.

From the summit, at 3,045 feet elevation, visitors are greeted by 360-degree sweeping views that take in postcard perfect snapshots of the historic town in miniature framed by surrounding peaks.

“The view, the view, and the view. That is what makes it special. From the top of the mountain one can look any direction, north, south, east and west and that is an outstanding feature for a mountain so close to town,” said my co-worker, Bear Yuba Land Trust’s Trails Coordinator Bill Haire.

Early in 2011, the city of Nevada City acquired Sugarloaf Mountain. 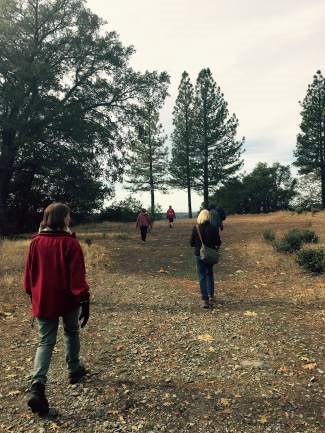 Now an open space preserve, Sugar Loaf is easily accessible from town along an old road turned trail that has become the primary route to get to the flat mountain top.

“The city’s primary goal for acquiring Sugarloaf Mountain is to keep the integrity of the view as it is a backdrop to the city and to keep the area around the city green,” said Nevada City’s Parks and Recreation Supervisor Dawn Zydonis.

Nevada City is in the process of creating a master plan for the property.

As part of this process, the City held a workshop on Dec. 8 to collect input from the.

A report summarizing the workshop and a draft master plan will most likely be presented to City Council early in 2016, Zydonis said. 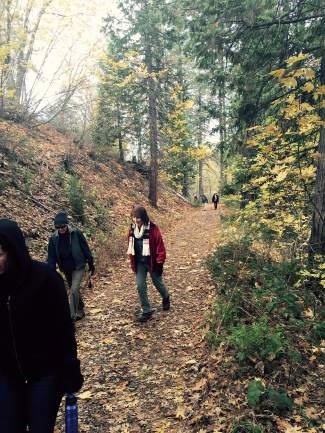 It is too early to know what future recreation in the area will look like.

“The city has historically encouraged passive recreation on their open space parcels, with only the development of trails and placement of benches,” said Zydonis. An example of this, is the popular Hirschman Pond, located just a short distance away.

“I’d like it to be a place people can go and learn about the area” said Ray Bryars, BYLT trails volunteer and longtime advocate of walkable communities.

Bryars has led several informational hikes on Celebration of Trails Day for the Land Trust.

He would like to see signage incorporated into any plan for Sugar Loaf.

“In the spring, there are a gazillion wildflowers. Informational boards along the trail — one that showed the variety of flowers, shrubs and trees — would be a bonus for hikers,” he said.

Further out, see if you can spot the high elevation peaks of Black Mountain, Mt. Fillmore (7,715 feet) some 32 miles away to the north-northeast in Plumas County and Saddleback Mountain (6,690 feet) above Downieville.

“I agree with Bill that the views are the outstanding feature. On a clear day, the coastal range is out there somewhere,” Bryars added.

How to get there:

Park in limited space along shoulder of the road up near the junction of Coyote Street and North Bloomfield Road. The entrance to the Sugarloaf Mountain Trail is the residential driveway on the west side of Coyote Street near the junction. About 40 yards up this driveway there is a locked metal gate (the official trail head) with room on either side to walk or pass a bike around.