Special to The Union 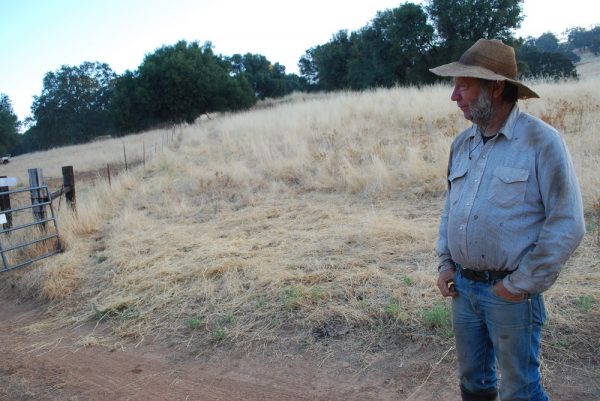 Gates – wearing rubber boots, stained jeans and weathered straw hat – whooped and whistled as his dog, Milo and three women on horseback helped guide the ten animals from the open dry rangeland through a gate. Walking behind them, Gates drove the cattle down a fence-lined dirt road to where Shapero and a truck and trailer were waiting to transport the herd to irrigated pasture on higher ground.

“I’ve been doing this since the day I was born,” said Gates, who started his business, Nevada County Free Range Beef with 12 animals eight years ago. Now he manages 300 to keep up with local demand.

“I probably feed myself and 500 other Americans,” he said.

Nevada County Free Range Beef will be the centerpiece of a farm-to-fork dinner during BYLT’s biggest fundraiser of the year, “Open Spaces and Wild Places: A Celebration of Land” on Sept. 10.

When he was a boy, Gates’ family ran cattle at Garden Bar when it was 3,500 acres, stretching all the way to what is now Spenceville Wildlife Area near Beale Air Force Base. In the summers, Gates drove cattle by horseback, with a rifle at his side, into the high country of the Sierra Nevada. 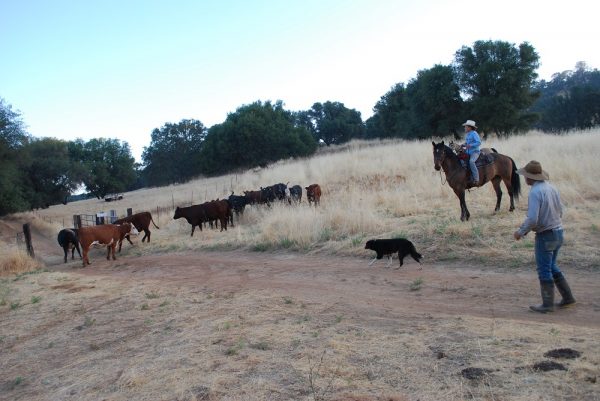 Besides water, access to land is the single most significant constraint of the business. Access to large, unfragmented landscapes, like 652-acre Garden Bar Preserve and 760-acre Linden Lea Ranch, is key to the success of the role Gates devotes his life to – feeding people.

“I think properties like Garden Bar and Linden Lea are absolutely critical in allowing Nevada County Free Range Beef significantly and meaningfully be an addition to the local food supply,” said Matthew Shapero who has spent the last three months working with Gates.

For Shapero, it’s been a summer of learning the rhythms of the season and the complexity of what it means to provide beef to the local community year round.

On average it takes 10 to 20 acres to support one cow and calf for a year. Jim Gates leases 4,000 to 4,500 acres to support current demand with variables such as time of year and nutrition of the grass coming into play.

Jim Gates’ cattle are grass fed and grass finished – something important to many foodies. They range freely over hundreds of acres of lush green pasture, enjoy fresh air, warm sunshine and clean water. They are not given hormones or antibiotics, their pasture grass is free of pesticides and the animals are never confined to a feedlot.

In the cooler months, many of Gates’ cattle spend their days at Garden Bar Preserve feeding on the nutrient-dense “strong grass” found in the Bear River Watershed. When temperatures rise, they are moved to irrigated pastures at Linden Lea Ranch to develop the nice muscle fat and marbling that customers demand. 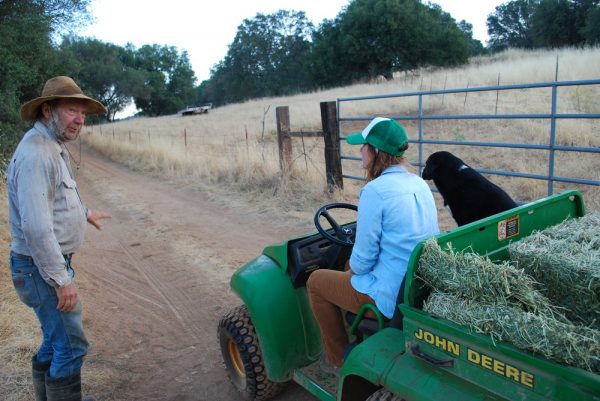 “I believe Nevada County Free Range Beef is very important to the local food system as there is a huge demand for local, grass fed beef and Jim is the only producer who is able to supply fresh product at fair prices to meet consumer demand. I have had several customers share stories about how impactful it has been to their health and that it is the only beef they will purchase,” said Meat and Seafood Manager Tristan McLarty for the Co-op.

McLarty meets with Gates regularly to predict growth and manage the program so there are no gaps in product.

“It is an incredible challenge and some serious logistics to keep up with,” said McLarty who has traveled to Reno with Gates to tour the processing plant, Wolf Pack Meats at the University of Reno where upgrades to the facility are being guided by Gates’ knowledge and direction. 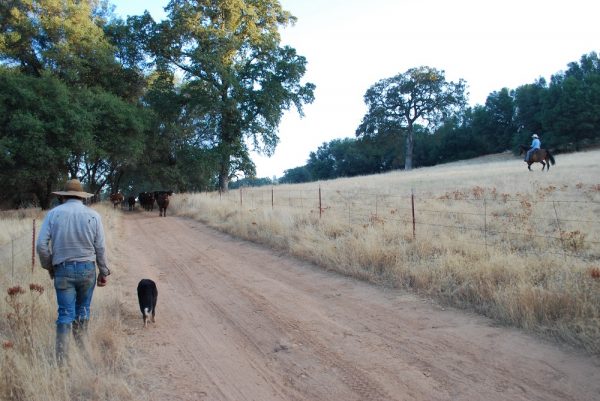 Piecing together a number of small acreage parcels to provide enough space and feed for the cattle can be a logistical nightmare, says Shapero. Land is premium and more large properties are needed to keep up with the growing demand.

The combination of ranching on Garden Bar Preserve in the cooler months and irrigated pastures of Linden Lea Ranch in the dry months, is the right kind of seasonality, said Shapero.

Working intimately with the land means Gates is dedicated to the health of it. He collects acorns to help with blue oak regeneration. He plants perennial grasses and gives the land time to rest and restore between grazing periods.

“He knows intimately every land he grazes. He knows every inch of it,” said BYLT’s Stewardship Director Erin Tarr.  “The most significant thing about Garden Bar Preserve is the amount of local food produced there,” she said.

At times, Gates’ work ethic is relentless. He works in 100 degree weather with no drinking water, digging fence lines in the most unforgiving conditions, often alone. He works from pre-dawn to after dark and finally eats breakfast when most people are settling down for bed.

Yet he wouldn’t trade in his lifestyle for anything.

“This is as close to free as I’m ever gonna get and there’s no price on freedom,” he said. 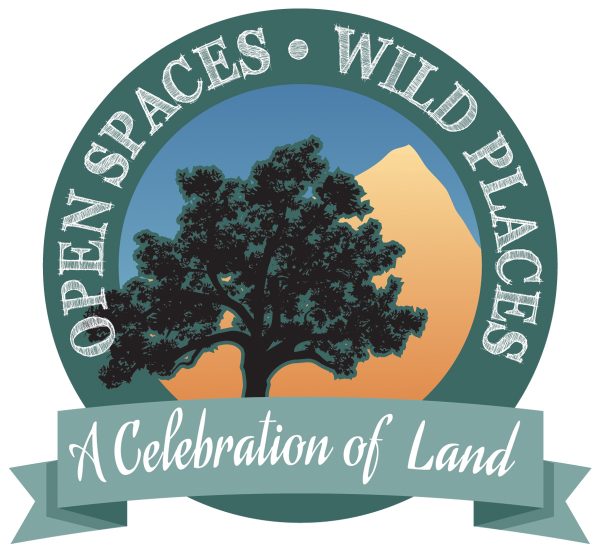 This special event on a permanently protected ranch includes a farm-to-fork dinner, dancing under the stars to a Latin jazz band, a nature-themed art show and a live and silent auction. Buy tickets: