Formed in 2007 by the Fire Safe Council of Nevada County, the Annual Scotch Broom Challenge was created to address the spread of the highly flammable and invasive plant. The event has grown from a few sites to numerous locations throughout Nevada and Yuba counties.  BYLT is one of five community groups partnering in eight public Scotch broom pulls this season. 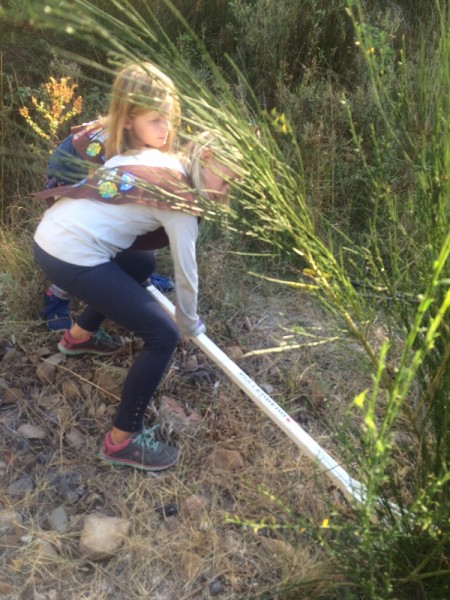 “The site has improved. An area previously sequestered by broom is now much more opened.  There is a large Scotch broom forest near the edge of the property by the road that we are making progress on each year,” said Stewardship Assistant Elias Grant.

The second Scotch Broom Challenge will be held from 10 a.m. to 1 p.m. on Saturday, April 9 at Rice’s Crossing Preserve South. No experience is necessary to participate and snacks and tools will be provided.

Many volunteers are needed to help with the southern stretch of BYLT’s largest landholding, Rice’s Crossing Preserve.

“Last year was the first year Scotch broom has been removed at the property in over 25 years.  Many of the plants are taller than eight feet and have roots the size of small trees,” said Grant.

Native to Europe and North Africa, Scotch broom was first introduced to California in the 1850s as an ornamental in the Sierra Nevada foothills and later used to prevent erosion and stabilize dunes. It spreads by prodigious seed production. One medium-sized shrub can produce over 12,000 seeds a year, according to California Invasive Plant Council.

The aggressive plant can grow three feet in the first year, form dense impenetrable stands that degrade rangeland, prevent native plant regeneration and create fire hazards. Dense stands can often be seen for miles along highways and country roads, crowding out native species and destroying wildlife habitat, according to the US Forest Service.

Scotch broom currently occupies more than 700,000 acres in California. Seeds can stay viable up to 70 years, according to the Fire Safe Council.

By removing invasive species, native plants will have more opportunity to thrive.

“A large part of conservation is restoring ecosystems and biological habitats to their former species diversity,” said Grant.

Bring: Bring work gloves and enough water for the day.