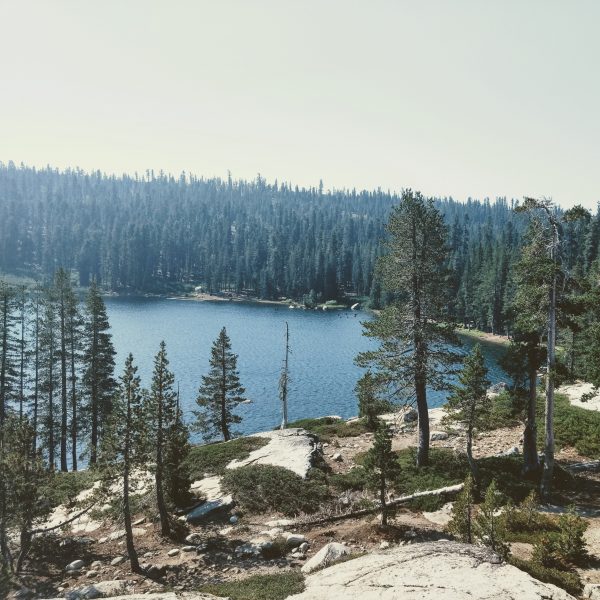 Once you arrive at Fordyce Lake you feel that you’ve made it to a very special place. The roads leading here are not for the timid and 4wd is highly recommended. The vast expanses of the lake are breathtaking and the wild country that surrounds the water provides habitat in its natural state. Animals roam free here and little human activity occurs in the furthest reaches of this conservation easement. Jeffrey pine (Pinus jeffreyi) forests and granitic rock walls provide true wilderness where evolution can continue uninterrupted.

Sterling Lake is easier to access and provides recreational opportunities as well as Camp Robert L. Cole, a Boy Scout Camp which has been in use since 1954. The north side of this lake boast fields of native wildflowers in the summer months and hiking trails take you to primitive campsites on the east side of the lake. You can also take the trails to Mossy Pond and beautiful overlooks of Fordyce Lake atop granite boulders.

Cool Facts:  The lone California wolverine (Gulo gulo) has been documented at Fordyce Lake. This Preserve is part of the critical important range for this, as well as many other, threatened species. A juvenile Northern goshawk (Accipiter gentilis) was observed in 2017 above Sterling Lake and a Pacific fisher (Martes pennanti) was observed just outside the boundary in 2014.

What to do there:  Developed campsites and trails can be found at both lakes.  OHV use is also popular in the area on existing roads, including the highly technical Committee Trail.  Canoeing and kayaking are allowed uses on the lakes.