** Cal-Fire is pile burning downed vegetation at our Woodpecker Wildlife Preserve. This work will continue into the Spring 2023 so smoke will be in the area. **

On this forested preserve in the Banner Mountain neighborhood, Woodpecker Wildlife Preserve is located on land formerly owned and managed by the Bureau of Land Management (BLM). First purchased and donated by a group called Saving Special Places, BYLT acquired the property in 1999. Old snags remain intact and provide good wildlife habitat for bugs, birds and mammals.

The Geri Bergen Memorial Forest at Woodpecker Wildlife Preserve in Nevada City commemorates those whose legacies live on forever.

Cool Facts: The Preserve is a mixed conifer and hardwood forest largely dominated by ponderosa pine, incense cedar, Douglas fir, big-leaf maple and black oak. Dogwood and madrone trees can also be found. The preserve is named for the woodpeckers in the area such as: Pileated, Downy, Hairy and Red-breasted sap suckers.

History: There is evidence of both hydraulic and hard rock mining in the area.

What to do there: The Cascade Canal crosses the upper slopes in the southern section of the property and a 4.5 mile trail of the same name is a popular shaded walk for residents of Banner Mountain neighborhoods. Departing from the Cascade Canal Trail is the Orene Wetherall Trail, completed in 2009. This 1.2 mile round trip “out and back” trail switchbacks down through Woodpecker Wildlife Preserve. Learn more about the Orene Wetherall Trail here.

How to get there: Gracie Road Trailhead: Take either Gracie Road or Banner Lava Cap Road easterly from Nevada City. The west end of the trail is accessible from the parking area on Gracie Road about 700 feet northwest (downhill) from the intersection with Banner-Lava Cap Road. Look for a “Cascade Canal Access Trail” sign on the east side of this parking area. A pleasant trail leads into the forest from this trailhead and connects with the main trail in 0.3 miles. Go left at the main trail. Woodpecker Wildlife Preserve is located approximately 0.7 miles from this trailhead.

Rules, regulations: Foot and bike only on the trail. Dogs on leash. No motorized vehicles. NO HUNTING. Stay on the trail; respect private property. Hikers and mountain bikers watch for each other and pass safely. 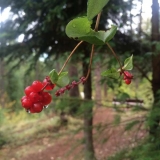 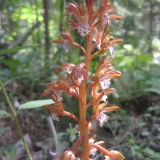