Editor’s Note: When BYLT asked local hiking guru Hank Meals to share some ideas about safety and etiquette when out on the trail, he produced this thoughtful list that we are happy to share. Be sure to sign up for a hike at Black Swan with Hank during this year’s Celebration of Trails, Saturday, June 4. 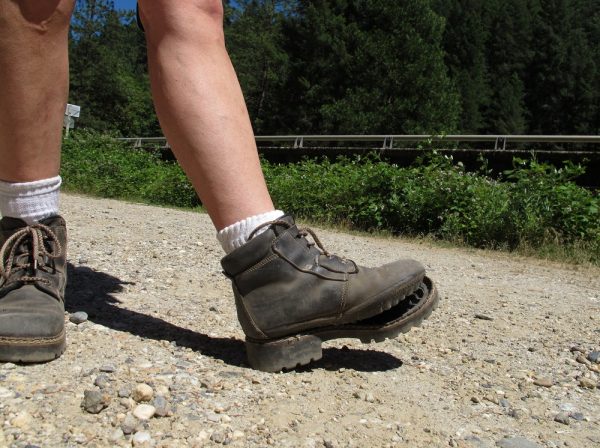 The most likely accident is to fall or trip and sustain an ankle injury or something worse. To minimize this possibility wear decent shoes with tread and ankle support and pay attention to your surroundings.

If you’re climbing or rock hopping, make sure that your footing is sound before transferring your weight. When climbing a vertical rock slope maintain some distance between you and your partners and if you should dislodge rocks, logs or branches be sure to call out to those below you.

Learn to identify poison oak and avoid it.

Ticks can be trouble – I’ve had many bites over the past decades but no serious problems. On the other hand there are people who have been bitten once and have had their lives changed forever (see Jordan Fisher-Smith, etc.). To avoid them stay out of the brush, wear light colored clothes so that they can be seen and by all means examine your body (or have someone else do it) after a hike. Some people even tape the bottom of their pants legs to keep them out. If bitten keep an eye on the bite, read the voluminous writings on the internet and/or see a doctor.

Snakes, mountain lions and black bears would rather avoid you. If bitten by the reclusive Pacific Rattlesnake try to stay calm. The best remedy is the key to your vehicle – get to a hospital. Most bites happen to people who are teasing or tempting snakes.

If a wild animal allows you to approach it that usually means that they are probably sick or dying. Don’t handle “friendly” creatures.

Pack another layer (and perhaps a windbreaker), a flashlight or headlamp, a simple first-aid kit, enough water, a rudimentary map and a bandana. Wear a hat.

This is an important consideration but an unlikely occurrence on most BYLT outings. Look it up anyway.

Carry enough water. Excessive sweating can cause a loss of trace minerals and salt that can result in cramped muscles. There are drinks and powders that contain electrolytes as well as foods like bananas and potatoes that provide a natural source.

Heat Exhaustion is a more serious matter. The symptoms include pale and clammy skin, muscle cramps, profuse perspiration, nausea or vomiting, dizziness, headaches, a staggering gait and fainting. When these symptoms occur treat the victim for shock, apply wet cloths to the forehead and neck and offer sips of salt water. You may also consider cancelling your hike because Heat Exhaustion can escalate to Heat Stroke.

Hopefully this will never happen on a BYLT hike because we are all looking out for each other and we will notice unusual behavior and physical changes. (Note that Hypothermia, Heat Exhaustion and Heatstroke all include confusion and bad decision-making as symptoms. I was once on a fire-fighting crew when our boss was obviously confused by the early stages of hypothermia and we had to usurp his authority). 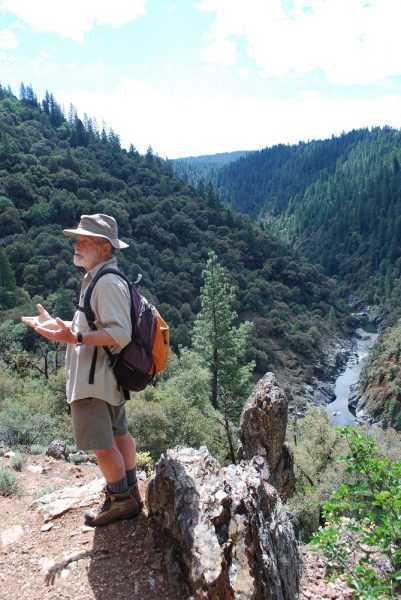 Trail etiquette is not limited to our interactions with other primates but also extends to how we treat plants, animals, water sources and courses, geological formations, archaeological sites and private property. The now seldom-heard advice to “Leave no trace” has been replaced by the even more pointed slogan, “Pack it in- Pack it out.” That seems straightforward enough but still some hikers leave wads of used toilet paper, cigarette butts and wrappers on the trail with ultimate faith in its biodegradability. True, it will eventually decompose but not before many people have viewed it and maybe even surmised that it’s all right to behave this way. This is a degradation of the trail’s aesthetic dimension – even if it’s invisible to you, you owe some consideration to others.

While apples and oranges are also biodegradable their cores and peels are as different as, well, apples and oranges. I had a friend who ran pack trains to the mines in the upper Downie River (North Yuba) region in the 1930s and 1940s. He said that they always planted apple and pear cores at places where they stopped to water animals and take breaks. Sure enough, I’ve been to many of those places and there are indeed fruit trees growing there. Oranges on the other hand never grow in conifer forests and it is slightly jarring to find a vivid display of orange peels in the typically restrained palette of colors. They tend to hang around for the season and just don’t belong there. I know I’m fussy but the forest is not a dump – so have mercy – dig a hole and cover them, hide them under a rock or pack them out.

People love their dogs and often take them hiking. That’s fine but of course with a dog you’ll see less wildlife. When I take a group out on hikes I won’t allow dogs because if it’s OK for one person to bring a dog then it’s OK for all the others to bring theirs. You have no way of knowing the chemistry between dogs and it can get ugly.

Smoking during fire season is anti-social and dangerous.

Pay attention! These days any group of hikers usually includes several people fidgeting with their glowing rectangles (phones). They want to be informed from on high about where they are. There is no denying that GPS has its place, but for me it’s far more rewarding to mentally note landmarks and features along the trail – to engage with the landscape – to get to know a place.

~ Hank Meals, Author of The River: Hiking Trails and History of the South Fork of the Yuba River