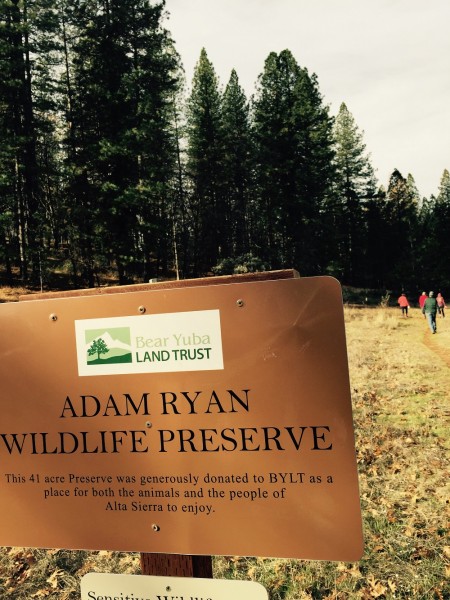 Site prep is underway for a 3,000 square foot pollinator garden at Adam Ryan Preserve designed to attract native pollinators and migratory and native butterflies, becoming the first of its kind on any Land Trust property.

“The plants we are installing are host plants for specific species of pollinator. These pollinators require having these plants around for their continued existence. We will plant native shrubs and wildflowers with the hopes of attracting more pollinators and encouraging more symbiotic relationships between these plants and their pollinators,” said Stewardship Program Manager Erin Tarr.

“It will be a nice example of what people can do in their own backyards,” said Stewardship Associate Cathy Shirley.

Matt Borges of Boy Scout Troop 855 spent his childhood in Alta Sierra with the manicured lawns of the golf course, not the woods, as a playground. After observing a friend complete an Eagle Scout project at adjacent preserve, Mathis Pond, he volunteered to lend a hand to the Land Trust.

“It’s the thing you dream of doing as a little kid,” he said of his final scout project.

Donations of soil, mulch and native plants are being sought with needed supplies and tools supplemented by money raised from a community Pollinator Project campaign at BriarPatch Co-op last summer. Sierra Plumbing Supply donated irrigation line to ensure plants survive through the first fragile months in the ground.

With funds secured through CAL FIRE in 2012, BYLT performed fuel reduction and removal of the dominant invasive species understory, opening up the pollinator garden site. The next step, in prepping the pollinator garden is to remove the re-sprouting forbs, grasses and roots by hand, followed by plantings in early February.