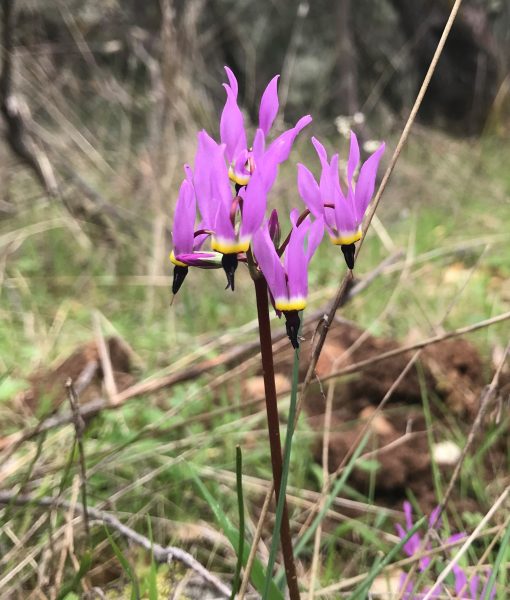 With wildflower season in full bloom it’s important to remember to look, enjoy and leave them be.

In California, it is against the law to pick wildflowers on public lands, along roadways or on private property. Doing so could result in a steep fine.

“These flowers turn into seeds and drop into the soil. Once the rains come, the seeds sprout into new flowers. Without the seed source in the soil we would not have these beautiful flowers on our Nature Preserves,” said BYLT’s Stewardship Associate Cathy Shirley.

Besides preventing others from enjoying the natural beauty and heritage of wild lands, the child-like innocent act of picking flowers means fewer seeds will drop for next year’s season. Removing wildflowers reduce a plant’s ability to reproduce and will adversely affect its long-term survival in that location.

“Let’s honor wildflowers by leaving them in their homes. Enjoy them by getting down on your hands and knees to greet them at their own level. It’s more fun for you both that way.  We want to leave them in their homes, so they can bloom and then spread their seeds to make more little plants.  Using a hand lens to look at them will open up a whole new world for you,” said author Julie Carville who plans to release her newest book this spring, Tahoe’s Spectacular Wildflower Trails.

Picking wildflowers means less nectar and pollen for pollinators like birds, bees and bats. Removing wildflowers from the wild can also adversely affect other animals that depend on that species for food and cover.

Most wildflowers when dug from their natural habitat do not survive being transplanted. Many native plants are available for purchase from nurseries. Gardeners will have a higher success rate growing plants that were raised in cultivation rather than dug from the wild.

In the northern Sierra Nevada region, wild populations of showy and desirable native plants such as lewisias, orchids, lilies, and succulents have declined from illegal horticultural collecting, according to the California Native Plant Society.

“The use of native plants for gardens and landscaping should be encouraged for a variety of reasons, but removing them from the wild is illegal, irresponsible and destructive,” according to the book, “Wildflowers of Nevada and Placer Counties, California” by the Redbud Chapter of the California Native Plant Society.

Federal lands are experiencing increased poaching of native wildflowers including those listed as endangered species. In some cases entire populations of a species have been stolen, according to the U.S. Forest Service.

There are legal ways to collect native plants from federal lands that will allow their use but still sustain them for future generations. Permits to collect plants or plant material can be obtained by contacting local Forest Service District Offices.

When out on preserves and trails this spring, BYLT urges parents to teach their children to respect and protect wildflowers and their habitats by leaving only footprints and taking only photographs.

Bear Yuba Land Trust is a community-supported nonprofit organization dedicated to the preservation of forests, open space and farmlands in the watersheds of the Bear and Yuba River. In addition, the organization builds and maintains miles of local trails and provides quality nature programming for all ages.