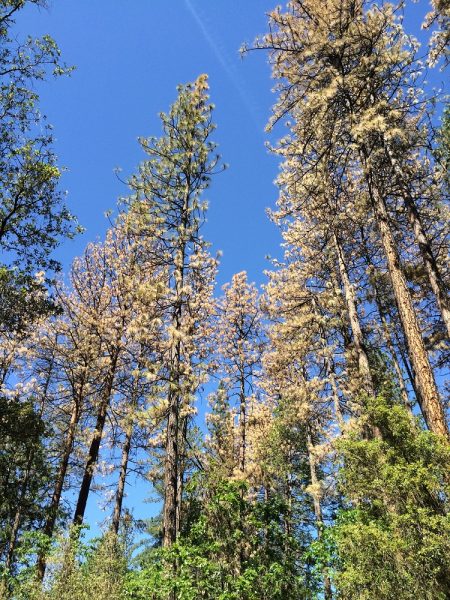 We’ve all heard about the current epidemic running wild through our local forests. Bark beetles have claimed numerous victims and the devastation continues with no sign of stopping. Governor Jerry Brown declared a State of Emergency in our forests on October 30, 2015. CAL FIRE has issued Drought Mortality Exemptions that allow landowners to forgo the typical process of being approved for projects and undergoing environmental compliance checks and allows loggers and foresters to remove these dead and dying trees at their own discretion.

As a land manager focused on active and adaptive management with an emphasis on protection of wildlife habitat, native plant populations, and public safety, I find myself in a position of making very difficult decisions when it comes to trees killed by bark beetles. With the help of the BYLT Board of Directors and staff, as well as many other professionals in the community, we are attempting to weigh all of the factors and make the best choices based on all of our land management priorities.

There are problems that need immediate attention due to the nature of BYLT’s landholdings.

Many BYLT Preserves provide public trails for the community. Our Burton Homestead is a popular location for kids to get outside and learn about nature through Rick Berry’s Fox Walkers Program and BYLT’s Summer Camps. Leaving a large group of snags – dead standing trees – poses a greater threat that one will fall during a storm or wind event.

Do we cut them all down? The answer seems simple, but when contemplating what the most beneficial choice for wildlife and the forest ecosystem is, it becomes more difficult to decide. Snags provide critical habitat for about 67 species of birds and 29 species of mammals on the western slope of the Sierra Nevada (Raphael & White, 1976). These creatures rely on snags for survival, and bark beetles provide a valuable food source for woodpeckers. Foresters I have consulted with say that once a tree is brown, the beetles have left and no longer pose a threat to the tree. In time this dead tree will lose its needles and limbs and slowly transform into one of nature’s most desired dwellings.

Then there is the overarching question of human manipulation of natural processes that has brought us to this point. Suppression of wildfires has created forests that are overstocked and in desperate need of management. Taking away the crucial tool of fire from our landscapes has produced a perfect storm for epidemics such as the bark beetle invasion. Four years of severe drought conditions weakened many trees and allowed their susceptibility to these attacks. As a response, humans have come up with a solution to manipulate the natural processes further. I’m not disagreeing with these choices. It makes sense that large groups of dead trees would burn hotter in a fire event because of the red needles that are dry and susceptible. But it doesn’t mean a fire is more likely to ignite in that area. After a dead tree loses its red needles, a fire is able to pass through the area more quickly and burn less intensely due to a lack of volatile oils in the tree (Gabbert, 2010).

The point I would like to convey is that these decisions must be made on a case by case basis. Every dead tree does not need to be cut down. There is critical habitat value in snag trees that need to be maintained throughout our landscapes. Natural processes in the environment need to be understood and respected to our fullest ability. When public safety is at stake, that decision is much easier for BYLT to make. We must keep our public trails and preserves as safe as possible. At Burton Homestead we have undertaken our first logging operation to remove approximately 60-70 trees killed by bark beetles. Jerry Ryberg and Ridge Logging approached BYLT to offer help. An exceptionally professional job has been done in minimizing collateral damage of other trees and keeping skid roads and general land alteration to a minimum; however, the effects are still vast and the landscape is changed. We will now begin restoration efforts and begin rebuilding sections of trail. Grayson Coney, the cultural director for Tsi-Akim Maidu and the central land manager for Burton Homestead over the past few decades, has stepped up to begin to put the land back together. With the help of volunteers, Fox Walkers, and NCCC, he will be restoring the understory and conducting burns until the job is done. Our neighbor Roger McGeeHee allowed access through his property to get the job completed. Logging is not light on the land and Roger deserves our deepest appreciation for making this project a success.