The more I hike, inspect, and build trails,
the more I appreciate the tools that were invented before my time. 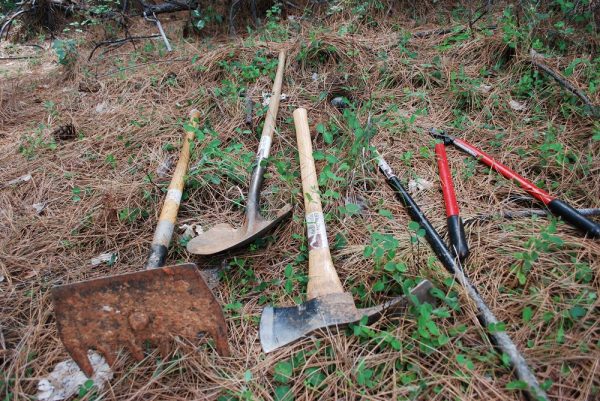 Any trail that you have walked in your life was no doubt, at least partially, sculpted by a Pulaski or a McLeod. We used these two tools extensively to build the Rambler Trail at Clover Valley Preserve.

The names of these tools are esoteric, unless you fight fires or build trails. Once you are introduced to these two workhorses, you can’t forget about them. I can detect a certain gleam in the eyes of trail builders when these tools are mentioned. It’s a magical time when these tools are first introduced. Like an old flame, people connect with these implements of destruction in a heartfelt way.

The McLeod and Pulaski were designed to fight wild fires but are quite utilitarian. Many of my volunteers have purchased their own for personal use around the house and garden because they are so useful. 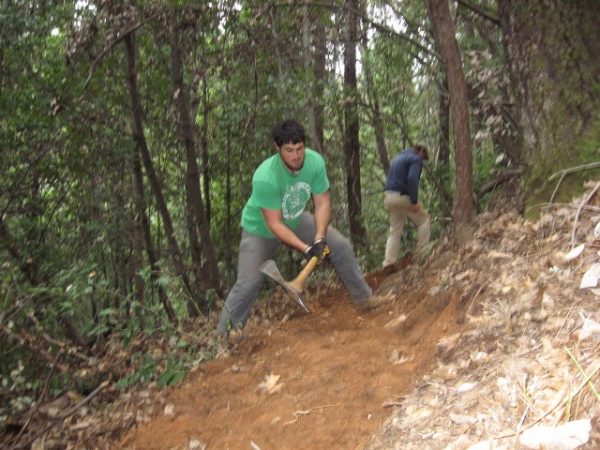 Far from graceful, the Pulaski functions at a high level. This versatile tool has an axe on one side of the head and a mattock for digging on the other. For trail building, the axe is used to chop down small trees, cut roots and split stumps into pieces. The mattock works great for cutting in the “bench” for the trail, digging out vegetation, and prying out rocks.

The invention of the Pulaski is credited to Ed Pulaski, an assistant ranger with the United States Forest Service, in 1911. A similar tool was first introduced in 1876 by the Collins Tool Company. Ed Pulaski was famous for taking action to save the lives of a crew of 45 firefighters during the disastrous August 1910 wildfires in Idaho. His invention (or reinvention) of the tool that bears his name may have been a direct result of the disaster, as he saw the need for better firefighting tools. The Pulaski came into wide use by the Forest Service after 1913, and in 1920 the Forest Service began contracting for the tool to be commercially manufactured, according to www.fs.fed.us. Timothy Egan’s book, The Big Burn: Teddy Roosevelt and the Fire that Saved America goes into more depth about Big Ed and history around the invention of the Pulaski. 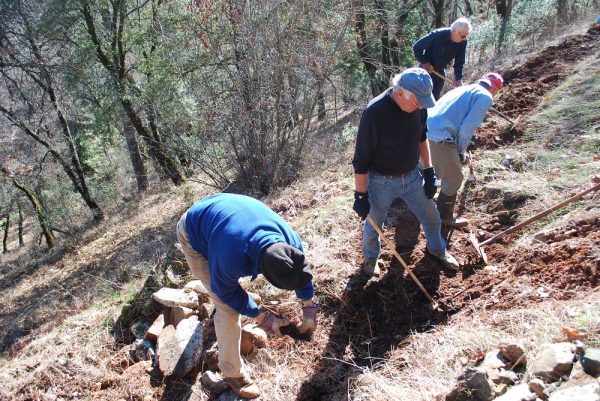 In 1905, Malcolm McLeod, a US Forest Service ranger at the Sierra National Forest created the combination tool with his namesake, the McLeod, according to www.fs.fed.us. The McLeod has a longer handle than the Pulaski and is used for accomplishing different tasks. It has a large wide hoe on one side and rake tines on the other.

One of the first, and most important steps in trail construction, is removing the “duff.” Duff is dead plant material such as leaves, bark, needles, and twigs, which have fallen to the ground. The tined side of the McLeod works great for scraping off the organic matter as the trail width and location begins to take shape. As the needles and leaves are cast aside, roots and small rocks are exposed. The hoe side of the McLeod chops through this debris with ease. With a quick flick of the wrist the business end of this tool is changed.

McLeods also serve as a tamper out in the field. The flat part can be rammed into the earth to pack the trail tread and create a more finished look. When the bench is being cut for the trail, the back slope needs to be formed and the fact that this tool has a wide flat cutting edge, makes it ideal for this task as well. When we build trail, we want the tread to be out sloped so water will run across the trail and not along it. When you stand this tool up on the trail you can check to see if the one to three percent outslope has been adequately captured.

These two tools can accomplish about 75 percent of the work involved in building trail. If we add a shovel, rock bar, wheelbarrow, and a saw, we can conquer all the tasks, barring anything unusual or unforeseen. We do our best to keep our tools sharp and in good working order because a sharper tool is a safer tool.

I am always looking forward to the next great trail tool and trying out new items that hit the market. In comparison, the classic McLeod and Pulaski are unbeatable. If you are not familiar with these tools, I encourage you to give them a try. You will not be disappointed.