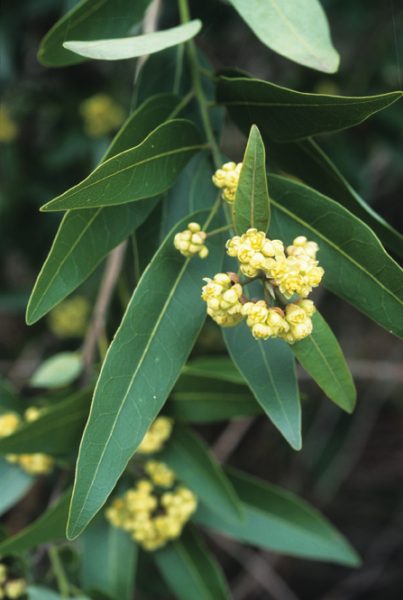 California Bay, Umbellularia californica, of the Laurel Family, can be found on hillsides, near streams, in the upper foothill and mixed conifer belts, and moist canyons below 5,000 feet. Other names for the plant include Oregon Myrtle, Pepperwood, and California Bay Laurel. In the Nisenan language, the plant is called sowdasim c’a. In KonKow Maidu, the nut is called sojba. Traditionally, Bay nuts were cooked in the ashes and enjoyed as a food. Leaves were used as an external foot bath and as incense to cleanse the bark house and keep insects away.

In the wild, California Bay will grow into a dense shrub in dry settings or a 75′ – 100′ tall and wide tree when growing along creeks or in moist forests. In the garden, it grows slowly to 25′. It bears leathery, deep yellow-green, 2″ – 5″ long leaves that are pointed at both ends. The leaves are highly aromatic when crushed. Clusters of tiny pale-yellow flowers emerge in the early spring and become 1″ olive-like fruits in the fall. 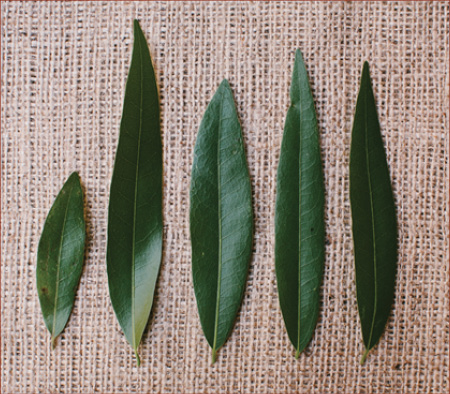 To use as an insect repellant, make a tea for external use with 5 leaves per cup of boiling water. Let soak overnight. Strain into a spray bottle and apply as needed. The spray can also keep insects away from the house. When hiking, just rub a bay leaf directly on the skin to discourage mosquito bites.

Enjoy the leaves as a seasoning in winter soups or make your own native ice cream. If you would rather taste it than make it, visit Treats in Nevada City. They created the recipe and are serving it in their ice cream shop this month.

Add California Bay leaves to soups as a flavoring, using 1⁄2 the amount recommended in recipes that call for non-native Bay leaves. Commercial Bay leaves are from the Bay Laurel tree, Laurus nobilis, native to Asia Minor and cultivated throughout the Mediterranean region. 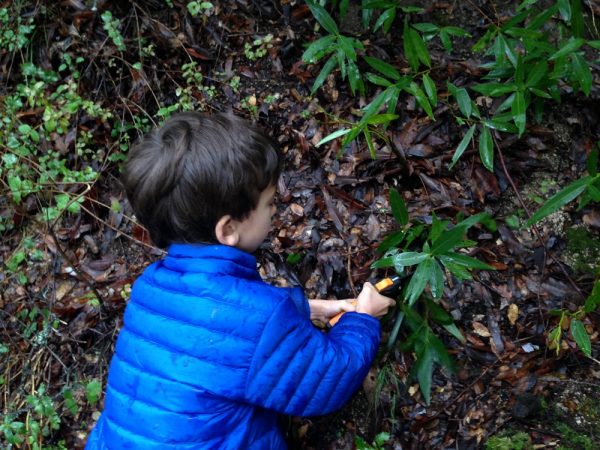 – Using the back of a spoon, lightly scrape the top and bottom of each California Bay leaf, on both sides of the leaf. Repeat twice. This allows more flavor to infuse the milk and cream.
– Warm the milk, cream, salt and California Bay leaves in a saucepan over medium heat, stirring occasionally until the steam begins to rise. 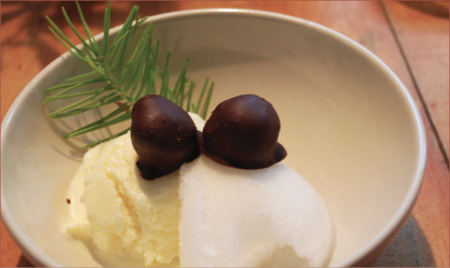 Continue warming for about two minutes while stirring thoroughly.
– Cover and remove from heat. Let steep for 25 minutes then strain through a mesh strainer and discard the spent leaves.
– Whisk together the egg yolks, sugar and cornstarch in a large mixing bowl. Slowly stir in the infused milk.
– Return to the saucepan and cook over medium heat, stirring constantly with a wooden spoon, until the custard thickens enough to coat the back of a spoon (approximately 85o). Do not boil.
– Immediately pour the custard back into the mixing bowl and cool quickly by placing the bowl in the refrigerator or an ice bath (a large bowl of ice 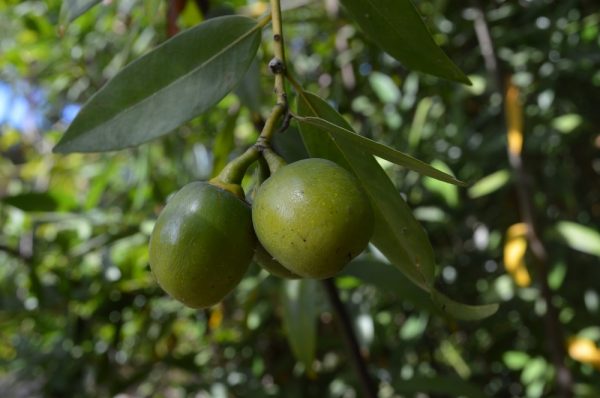 and water into which the mixing bowl can sit and cool), for approximately 15 minutes.
– Whisk in the vanilla and nutmeg. Cover the bowl and refrigerate at least 3 hours to overnight.
Pour the mixture into an ice cream maker and freeze according to the manufacturer’s directions.
– Transfer the ice cream to a covered container and freeze until it is firm enough to scoop.
– Makes about 1 quart.

Pledge to spend quality time in nature with your family this year!

Join BYLT’s Family Nature Club and we will mail you a FREE sticker to share your commitment to spending time in nature with your family.